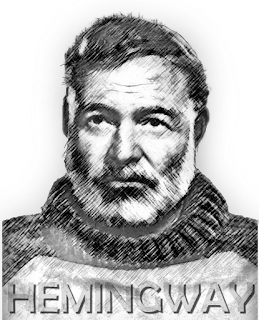 I made this Hemingway image back in the fall.  Yes the quote about hunting men is creepy indeed.  I did enjoy his novels though.

When I was a kid I lived in a forest, so I hunted.  My buddy French used to bring his .410 shotgun out on some of his visits.  We'd have to sneak it past my mother, and we'd head out deep into the woods. There was an old abandoned house, and barn out there, and they were full of doves, and pigeons.  We'd also see the occasional rabbit, or partridge.

One day French started popping a few rounds off, and he was nailing doves, and pigeons.  One fell really close to his feet.  He picked it up and spun it around by the head the body fell to the ground, and he tossed the head into some weeds.  French picked it up and deftly pulled out the two breasts.  He started a fire, and had me repeat the procedure a few more times.  French used an old cast iron pan to fry up about a dozen little dove breasts.  He had also brought what we called Lebanese Bread (sort of like pita bread).  We stuffed the bread full and had a nice hot meal.  I looked over a French, and he said: "damn I was hungry".

I agree, his writing is quite something. One of my most precious possessions is a first edition of A Farewells to Arms. I'm also quite partial to some of the point made in his Nobel Prize acceptance speech.

I, too, grew up in the country. In my case, I did a lot of my hunting with slingshots (birds and rabbits). I've never use French's method of butchering, so the scene caught me by surprise.

I got up with chicken coops and chickens in the yard. As a child the meat i ate was home grown chicken.

Thanks for dropping by to read mine

I'm glad you ate what you killed.

Oh, Brother Ollie, this was riveting, and hard for me to read. Please tell me he didn't grow up to be a serial killer!!

He was a fine writer. I think this piece of yours is quite Hemingwayesque in style.

PS Like Bev, I found it hard to read. Hard to contemplate what is described. Yet, I think what goes on in abattoirs is probably a lot worse. (And still I am not quite vegetarian.)

I agree, your style in this prose is reminiscent of Hemingway whose writing I have devoured. French sounds like a good friend of my Uncle Billy’s from decades ago when I was a girl. Really enjoyed this ...

A lot of have done like this. I gave mine to the cats to eat. My gun was a BB gun and I was a good shot with it. I don't eat wild stuff, my dad ate the rabbits he shot. Mom would cook them so he took them to his mother to do it. Passing a truck full of pigs almost makes me turn vegetarian but not quite, at least yet.
..

Brother Ollie
These are poems.